Recently we’ve been focusing on reviews of national parks we’ve visited instead of the weekly blog. In between national parks though we’ve stumbled across some interesting places we thought we should share with friends and family. We also thought we’d fill you in on how the daily traveling is going. Salton Sea When we decided we didn’t want to stay at Slab City we backtracked to the Salton Sea. Although beautiful and a great bird watching habitat the Salton Sea has it’s oddities. First of all, it is smelly. It has a strong sulfur smell. What you think is sand along the shores is actually millions of barnacle shells! Everywhere! When you take a closer look there are also fish bones everywhere. Pretty much the only thing that can live in the highly salinated water (25% saltier than the Pacific) is Tilapia. But due to occasional algae blooms using up all the oxygen and suspected contaminants running off in to the sea from local agriculture they die off in the thousands and wash up ashore. It’s a really, really strange place, but beautiful! The birds seem to love it. There were many bird watchers in the area who came there to see the huge variety of birds who use the Salton Sea as an important stop on the Pacific Flyway. 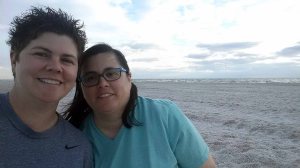 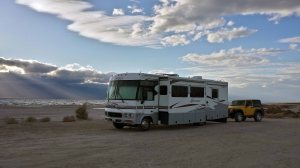 “Berta” at the Salton Sea

Los Algodones, Mexico While staying in Quartzsite, AZ (see previous blog post) we made a day trip to Los Algodones, Mexico. Just across the border is a tiny town catering to Americans seeking cheap dental, optical and, as scary as it may sound, plastic surgery. There must be 50 dental/optical places within a 4 block area. You can buy all sorts of pharmaceuticals without a prescription. We stocked up on antibiotics for the occasional sinus infection. Alongside all of the pharmacies and clinics street vendors are selling bags, clothes, blankets, trinkets, artwork and the like. You have to barter for everything or you’ll get ripped off! After buying our antibiotics, a bag and blanket we went for some cheap nachos and margaritas, all the while being shown various jewelry and other things we could purchase right at the table. It very much reminds me of trying to walk down the street in Vegas or the game area of the state fair. 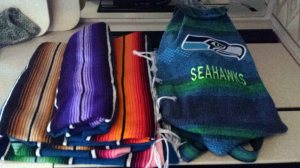 Lost Dutchman State Park We met up with cousins Sara and Andy near the Phoenix area prior to our arrival in Sedona. This was our first real up close encounter with the Saguero cactus! You know, the tall one with arms. We had a nice leisurely stroll up to the Superstition mountains complete with some wildflowers starting to bloom! Lost Dutchman is a great escape in the Phoenix area with lots of trails to explore. 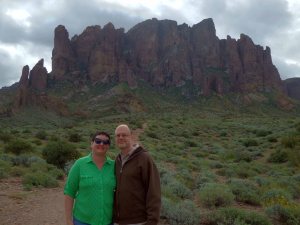 Lo-Lo’s Chicken and Waffles If you’ve never eaten chicken and waffles, which is a southern tradition, add it to your list! Recommended by Sara and Andy we went to Lo-Lo’s in Phoenix and it blew our minds. Yes, fried chicken alongside waffles, and of course syrup, spicy collard greens, kool-aid and banana pudding for dessert! Wow. We still talk about it. 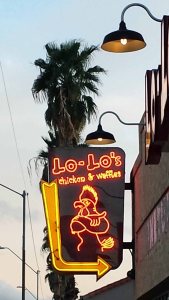 Traveling We are refining our routine for making and breaking camp since we’re doing it a lot more often. We’ve updated our “pre-flight checklist” to include those little things we often forget about like latching the sliding doors and making sure we know where the cat is before leaving. We’re also getting better at finding free locations to camp and places to dump/refill our tanks. For stays of more than one night we want to find a more scenic place, and one where we can up our slides out. This includes a lot of BLM land and some casinos. For a quick stop and sleep situation we fall back on Walmarts and truck stops, maybe even a rest stop. The noise at these places doesn’t bother us and it’s nice (at truck stops and rest stops) to know it’s designed for big rigs and we can pull in after dark without much research. Our nicest free locations so far have been by Death Valley (unknown land owner), BLM land by Quartzsite, forest service land near the Grand Canyon and a gift shop by the Petrified Forest that provided free spots with picnic tables. 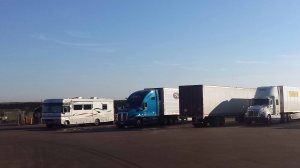 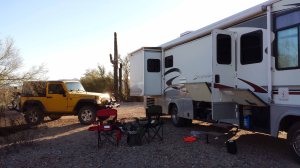 We’ve found that we look for and use Flying J locations quite often since they usually have an RV dump station that, with a membership, can be used for $7.50 and includes fill up of fresh water which can sometimes be difficult to find, especially in the desert. There is typically a fuel station right at the dump station so you can do it all at once. RV Issues In the past couple months we’ve had a couple small issues and one fairly big one. Our hot water heater quit working again and this time cleaning the connections didn’t work. We talked to a knowledgeable guy at a RV parts store near the Salton Sea who recommended replacing the fuseable link and ta-da! At one point our fridge pilot light wouldn’t stay lit. Megann had the idea to clean out the burner tube and intake with the vacuum and ta-da! The only other repair was replacing some rivets that hold the piston arms for our overhead storage cabinets. For some reason these things break a lot so we carry a rivet tool and assortment of rivets. The big issue we had to deal with was the front windows next to the driver and passenger seats. They are double pain and had gotten some condensation in between. We had hoped that death valley would dry it out, like it did with our skin, but no such luck. We couldn’t put off fixing it any longer as it interfered with our ability to use our side mirrors. We were able to find a specialty place in Phoenix that had the glass we needed on hand. They were able to fix us up in a matter of hours. Daily life In the last month or so we have learned a few things. One, our cat is a jerk, well we kind of knew this, but it has definitely been confirmed. He continues to destroy things, mainly upholstery and cords for our electronics. We recently bought seat covers and 50 feet of wire cover to protect all of our cords. We have found though that if we clip his nails often he claws much less and does less damage. Two, while dry camping and conserving water we’ve become able to take a really good shower, even shaving legs using only 1 gallon of water each! Three, cooking in a super small kitchen is tough and we don’t like doing dishes so we try to cook in large batches so we have left overs for 3 or 4 days. We also purchase groceries about a week at a time due to the smaller fridge and storage space. Four, National Park Passes are awesome! We bought one ($80) and can now enter any national park, monument and a few other places for free all year. It’s already paid off in a big way since some of the parks we’ve been visiting are over $20 per person. And a plug for those over 62, you can get a lifetime pass for $10! Money well spent if you ask me, especially since one pass admits 4 people (any number of people in your vehicle with the senior pass). Here’s an update on the dogs for those who are interested. Dexter is his usual high anxiety self. Although better most of the time while outside he still has meltdowns when seeing other large dogs. He barks less inside most of the time but is still scared of the stove/oven and sometimes gets really nervous while were going down the road. In between nervous spells he wrestles with the cat and sleeps next to Bailey. Bailey is the polar opposite, being pretty much chill most of the time but she still loves her outside walks and is easily distracted by a treat when she sees other dogs. Her life is all about food and sniffs! We do feel though that she is very near the end of her life although still happy today. The inoperable tumor is growing and is most likely cancerous so it’s only a matter of time. Fortunately for her she’s had a long life full of adventures but we are going to miss her so much when the time comes! 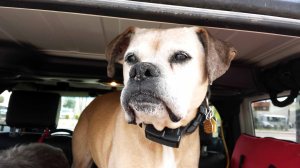 The Near Future We will continue to explore Northern Arizona and Utah’s National Parks and natural wonders on our way North to the West Yellowstone area at the beginning of May. We report for duty at Yellowstone Holiday on May 11th for orientation and will be working there, on the shore of Lake Hebgen for the summer! Our next blogs will cover our amazing time spent in the Camp Verde/Sedona area, Grand Canyon National Park, Canyon De Chelly and Monument Valley on the Navajo reservation, and the Moab Utah area including Arches and Canyonlands National Parks.