After leaving the Grand Canyon in March we continued along I-40 through Winslow (being sure to get a picture “standing on a corner”) then took Hwy 80 at Holbrook to Petrified Forest National Park. We stayed for free at the Crystal Forest Museum and Gift Shop which actually had a few RV spots – no hook ups of course. The main road through the park is a 28 mile paved road between I-40 and Hwy 180 with short side roads or loops to areas of interest.

Well, obviously the main attraction at the Petrified Forest is the petrified wood among the dry open grassland! It is fascinating that two million years ago the area was tropical and covered in trees where all that is left now are petrified remnants in a surprising rainbow of colors. There are multiple walking paths along the main route through the park that highlight things like large logs, long logs or jasper as an example. 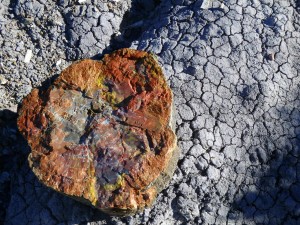 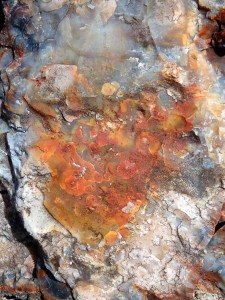 A half mile trail leads to Agate house, a partially restored pueblo made out of petrified wood. It was interesting to see this in comparison to all of the red rock pueblos we had seen further South in Arizona. Puerco Pueblo is another ancestral pueblo site.

Another sign of civilizations come and gone, newspaper rock is a petroglyph wall boasting symbols up to 2000 years old. 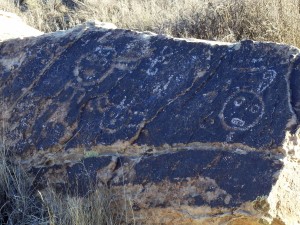 Aside from the petrified wood the park also contains some interesting geological formations and is cast with many colors from various types of minerals. The openness lends itself to amazing sunsets and if you could time your visit to coincide with the wildflower blooms. 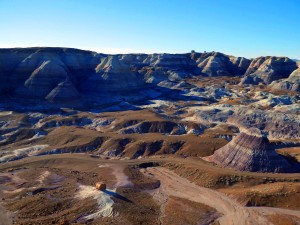 Paleontologists continue to study fossils in the park such as that of the crocodile-like phytosaur. The Rainbow Forest Museum contains fossils and replication of what the forests may have looked like long ago.

Being a small park it can easily be enjoyed in one day, depending on how extensively you wish to hike or explore. Backcountry permits can be obtained for overnight backpacking. This does happen to be a pet friendly national park so you can take Fido on the trails and even in to the back-country as long as they are leashed. 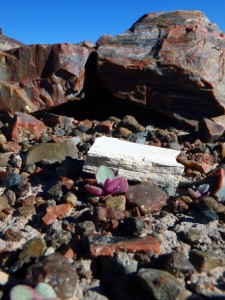 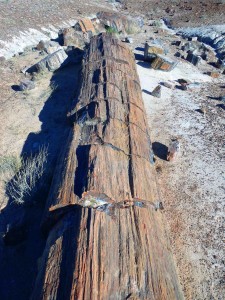